December 03, 2014
After Mikey was approved for SCAADL* on July 18, 2014 I still questioned why he wasn't approved back to his application date. To find out how we got to this point read HERE and HERE. I turned to our Congressman for help. It took some time but I received this email on Monday:

"I just received an email from the Department of the Army, Southern Regional Medical Command, advising us that the retroactive SCAADL pay has been approved at level Tier 3 for the period of January 31, 2014 through July 17, 2014.

The payment will be processed in December and will be sent in early January.  You will receive a separate payment statement; it will not be included in the monthly Leave and Earnings Statement.

Brigadier General Barbara R. Holcomb also wishes to extend her best wishes to you and your family and apologizes for the length of time it took to receive the approval." 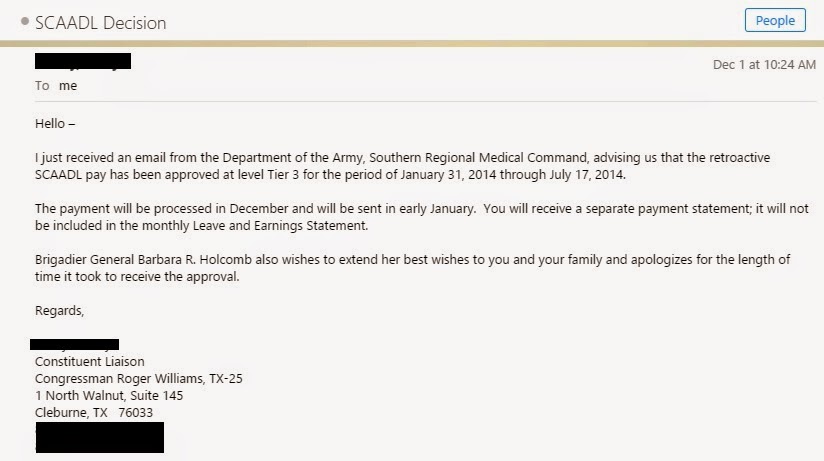 The reason I fought this so hard was a matter of principal and not money. The money is taxable so in all reality it's not that great. What matters is that a precedent has been set for soldiers coming behind us. Notice they are only back paying to January 31, 2014 even though we applied in December. He didn't develop dementia overnight but that is the date that the doctor put his diagnosis in the system.

We applied in December. It was denied in February. He had been diagnosed with progressive dementia in January. When we sent the appeal in March it was never added. It was not policy to change the original application. I had an issue with that. We did add it in our letter. The brigade surgeon did not and the commander only alluded to it after his lies that were enough to keep anyone from reading further.

I have not seen any hard copies of written policy but I have been told that changes were made. Now when and additional diagnosis is made after the original application it can and should be added to the existing application.

One of the big issues I also had was the company commander's letter being on top of the packet and us not having an opportunity to read it before it was sent. I believe the medical information should be on top and letters on the bottom. It seems too many in military leadership positions only read the cover of the book and not the story. Why bother reading essential medical information when a trusted leader writes everything they need to know? It's a big problem, especially when that cover page contains biased information or outright dishonesty. That needs to change. From what I have seen these commanders know very little about the soldier to begin with. They have all been cover page readers. Sorry, not all. There were a few that would read the whole story. Those few need to train the others about getting to know the soldier and looking for answers to questions beyond the cover.

There were many people involved in making this happen. Congressman Williams office started the investigation and that is greatly appreciated. I went that route because I was told by a Colonel to do so. I am withholding the name but if they read this, know how truly appreciated you are. The Command at Darnall that truly got what dementia is and how it really affects our lives. The Doctors at Fort Sam Houston. My friends in Washington that encouraged me and felt outrage with me. The medical side of Fort Hood WTU that tried so hard to do what is right to only get thwarted by policy that isn't in the best interest of the soldier. Our Ombudsman, the AW2 advocate. My family and friends. I also believe (strongly) the investigative news team played a part in getting this done. I don't mean to exclude anyone and I apologize if I did. Each one of you has in some form or another affected positive change for future soldiers.

*SCAADL=Special Compensation for Assistance with Activities of Daily Living.