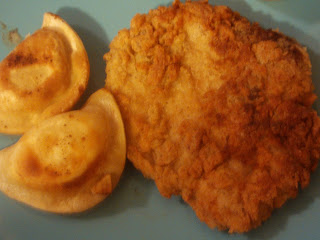 Growing up I had heard the old wives tale that raw pork will give you worms. All pork I ate was cooked until it was dry. Not that it was bad. It was what I knew and I loved a good fried pork chop. Especially when the fat around the edges was nice and crispy.

This blog is going to focus on the fried pork chop. The way I learned to fry a pork chop was to salt and pepper it then fry it in fat until it was fully cooked. I love the flavor this gave. Simple and easy.

When I met my husband I wanted to impress him with my cooking skills and asked him what he wanted for dinner. He told me fried pork chops. I don't recall what else I made to go with the dinner but I made him fried pork chops. He sat down to dinner and with a smile on his face ate every bite and told me how wonderful they were.

Let me go deeper into that and tell you that I am from Northern Minnesota and he is from Florida. Our ideas of good food had a rather large variation. I will defend myself here and say that I can cook 'Southern' right along with the best of the Southern cooks. But apparently not pork chops. I just didn't know it yet.

Being the news addict that I am there was a special on one night about the proper cooking time of pork chops. It is not 20 minutes per side on medium heat! The time depends greatly on the size of the chop of course and whether or not it has a bone. Ah! This was another thing that we didn't agree on. I preferred a chop with no bone and my husband likes the bone. My thinking was why would you want a bone, it's a waste! (Mainly because I'm a terribly fussy eater and don't eat anything near a bone.)

I've gotten sidetracked. I really didn't think there could be THAT much to talk about a pork chop. Oh yes, I heard that a slightly rare pork chops is not only safe to eat it is good to eat. I was utterly shocked at such news! Oddly enough after serving my husband pork chops that first time he hadn't asked again, if they would appear on his dinner plate he would eat them. I went on thinking all was well with my pork chops.

That is until one night he said 'Honey, let me show you what a Southern pork chop is like.' This was my first inkling that maybe mine were not as fabulous as I had thought.  He went through the steps of dipping the pork chop in an egg and milk mixture with salt and way more pepper than I had ever imagined using. I was fairly skeptical about this method of dipping in the wash then in flour. But the pork chops were fantastic. He fried them well enough to be done but not overcooked and they were fantastic. Let me add here that I am very thankful to have a husband that can cook, even if it means not always seeing eye to eye on methods and ingredients. I just like knowing that if I don't feel like cooking he is there to jump in and take over.

As years went by I kept experimenting with marinade and coating. I changed from a thick pork chop to a thin chop which takes only minutes of frying at the right temperature. My husband actually asks me now for fried pork chops quite often.

The recipe comes from nowhere except trial and error. The amounts were hard to figure out because I am a cook that just throws thing in until it looks right. Because I use my seasoning mix in several fried foods one day I was determined to figure out what all went into my special mix. I just always knew what bottles and cans I grabbed out of the spice cabinet. It was interesting to see it written down.

This recipe will make about 1 cup of mix. Enough to fry foods 4 times. Just store it in an air tight container and shake it up before using it again. 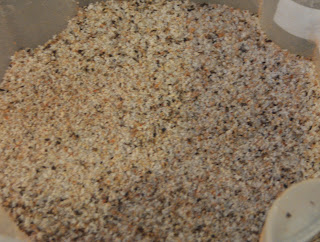 Those proportions seem high but it does get mixed into marinade and flour and that evens it out.

Another thing I learned from a television show was that don't just season the flour because the flavor is on the inside. After that I started adding my spice mix to the original simple marinade.

My marinade has no recipe either so here goes with trying to figure out what goes into it.

1 cup buttermilk (or regular milk if you don't have any)
2 eggs
2-3 dashes of soy sauce (This does amazing things for pork but don't get carried away, it's potent stuff. Just ask my husband.)
1/8 cup of the above seasoning 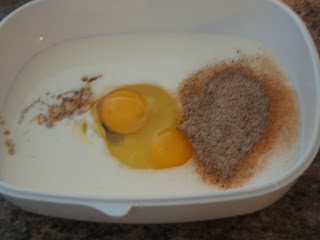 Whisk it all together or just pour it all into a gallon bag and squish it up. 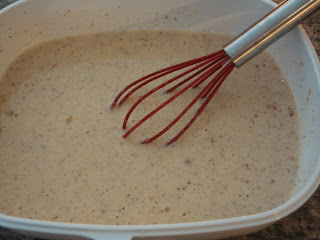 I have a Food Saver

that marinades and adore it's speediness. Feel free to use it to speed up the marinading time. If you don't have one, just throw your chops into the bag (or covered bowl) and put in the fridge for several hours. 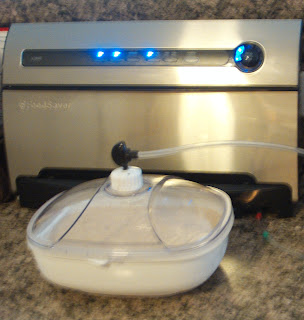 When I use the Food Saver I try to make sure there is enough to cover the meat. When I just use a bag I simply turn the bag over whenever I walk by the fridge.

Anytime sooner than 10 minutes before frying your chops you'll want to make the flour mixture that they will be dipped in. In a bowl that is a suitable size mix together 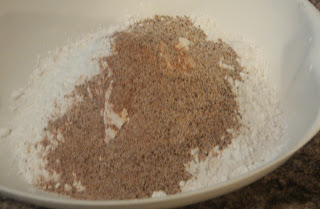 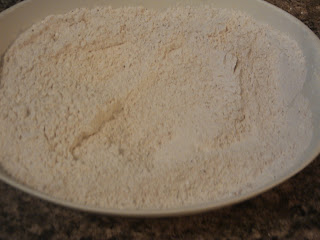 Whisk it together to mix well.

Without letting the marinade drip off the meat too much press meat into flour, turn over and flour any missed spots while pressing the opposite side into flour mixture. 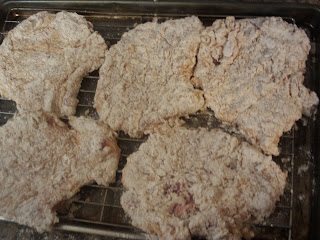 Have a wire rack over a cookie sheet ready and place the floured chop on the rack. Repeat with all chops.

While the chops are resting get your pan ready, I use an electric cooker just because of the size. I'm able to cook 4 at a time instead of 1 or 2. Add 1/4 to 1/2 inch of oil. Set the temperature to high. After the meat has rested place it in the hot oil. Use a meat tong to move the chops from the wire rack to the oil. You don't want to lose any of the coating. 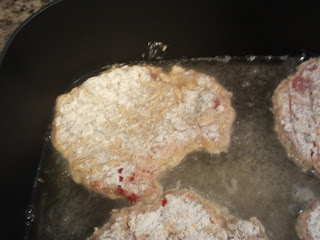 For the very thin chops that I'm frying you will only need to fry long enough on each side to brown. The meat cooks fast and you do not want to over cook it. That's what dries the chops out. No matter how thick the cut is you will want to make sure it's at an internal temperature of 160F. (No, I do not own a meat thermometer. I just want to make sure you know the safe temperature.) 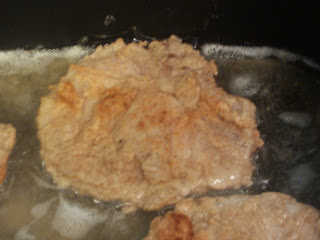 My husband likes pan gravy made with the drippings. This is not easily accomplished because he likes the gravy to simmer for 15-20 minutes and I don't want the pork chops to continue cooking even in a warm oven.

The next thing to agree on would be the starch. Rice or potatoes. He will almost always choose rice but for me nothing beats mashed potatoes. The real ones, not those flakes in a box. Rice usually wins because of simplicity. For this meal we agreed on pierogies sauteed in butter until golden. 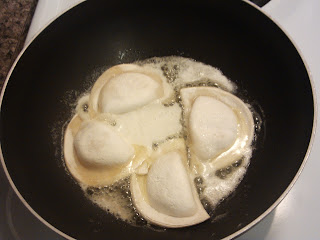 For anyone that does not own a food saver, this is probably the MOST valuable tool in my kitchen. I use it to keep food fresh longer, marinate meats, seal jars even pack things (like clothes) tight that will be shipped overseas.
Entree Pork Chops