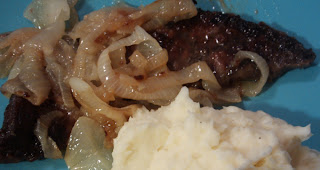 Liver is usually one of those foods that people either love or hate. Growing up we were never forced to eat liver but encouraged to take a bite. I grew up loving liver and onions. Well, the liver part and the flavor of the onions. I don't actually eat the onion although many that love this dish swear the onion is the best part of the meal.

Mikey HATES liver! Not just a little. He can walk into a house a week after liver has been cooked in it and be nauseated by the lingering odor. I could think of all kinds of adjectives to describe his hatred of liver. So why am I making liver and onions while he is home? Because of the Travel Channel. You know all those people that travel the world eating strange exotic foods. One of them talks about how disgusting something looks or smells yet raves about how wonderful it is to eat. That brings us to tonight. Mikey is willing to ignore the smell of the liver cooking so he can taste it. And he will. As I'm writing this preface I do not know how his taste buds will respond to the meal. I know that mine are watering just thinking about it.

I won't go into the physiology of the liver but I will say there is a great debate about it's nutritional benefit. There is one definite. Liver is high in Iron. That's a good thing. It's also high in Vitamin A which can be good to a point but too much Vitamin A is not good. Then the toxins that a liver may or may not have.
WholeFoods.org suggests that you can enjoy all the benefits of liver without a lot of the risks, by eating calf's liver. They go on to say that calf's liver is less likely to have the accumulations of toxins such as pesticides, hormones and antibiotics found in the liver of older animals. Selecting organic calf's liver provides the greatest assurance that the liver is free of these toxins. Calf's liver is also more tender. I try to get past the calf thing and just enjoy the liver.  So tonight we are having calf's liver.

Other than being a little more time consuming to cook it is a very economical meal. 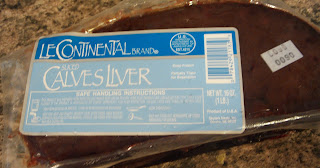 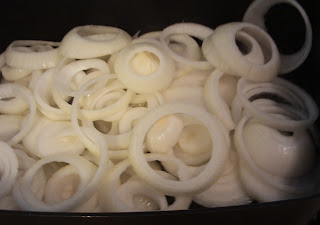 Start heating enough oil to cover the bottom of your pan on medium heat. Slice onions and place in large frying pan. (Again, I'm using my electric pan because of size.) Saute until lightly golden and limp. Turn with a large spatula to evenly cook. Cover the pan to help the onions sweat and reduce. 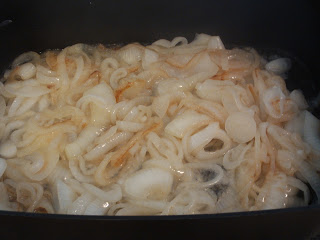 Using your spatula or a slotted spoon, remove the onions to a bowl. 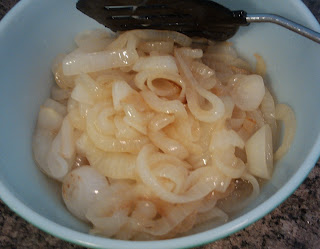 Put flour in a dredging dish (for me it's just a longer serving bowl) with salt and pepper. Mix together. Drain the liver in a colander. The meat is going to be very tender, very bloody and very slimy feeling. Wear gloves if you need to. Gently lay a piece of liver in the flour and press down. Turn liver over and press down again adding flour to the top where needed. Lay coated liver in the hot oil. Repeat until all pieces are done. 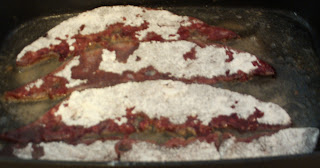 On medium heat (375F) fry on each side for about 5 minutes until brown. 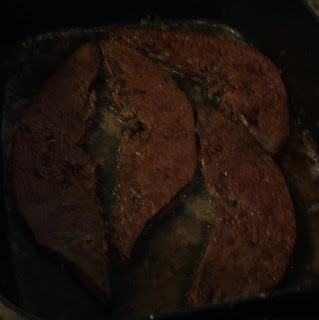 Drain the excess oil off the onions and lay over the liver. 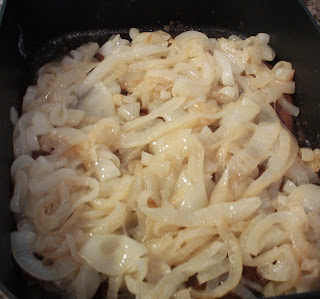 Turn heat down to low (225F), cover and let simmer for an hour. You will want to gently move things around occasionally. 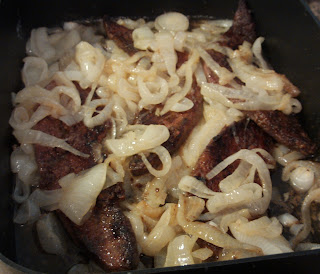 Now is a good time to make your mashed potatoes. About the time they are done the liver will be finished. The collards we had for tonight cooked almost all day. We like our vegetables soft and mushy. (Yes, even though they lose their vitamins. They just taste better.)  I'll post later how I make the collards. I'm not a fan of greens but I really do like the collards.

And the verdict is: Mikey still hates it. But at least he tried it. I won't go into detail as to what his opinion was.

Such a shame too. The liver was perfect and so tender.

Ellie said…
I might just have to make that, I have company coming today. I know that person loves Liver and Onions, not sure about his companion though.
October 8, 2010 at 7:38 AM