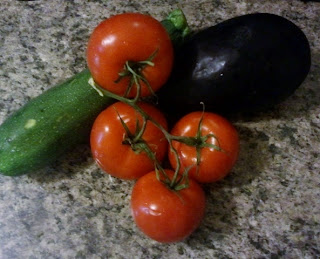 Someone commented they would like to see recipes that had eggplant, zucchini and tomatoes in it. I just could not find anything that I wanted to make that used all three at once. I have a friend that used this recipe and told me about it so I am sharing it with you.
I still have to decide what I'm going to do with my veggies. The tomato I'm not worried about. I'm sure the zucchini will become bread. I might just toss the eggplant into the bread too.

Any amount to your liking.
Instructions
Recipe from Bountiful Baskets.

If you have a Bountiful Baskets in your area I highly recommend them! You get two baskets of fresh produce for $15..amazing. In fact this recipe used many of the foods in our last basket. I think some might have been an Italian add on but still fantastic if you love fresh produce.
Eggplant Grilled Vegetables Italian Style Tomato Zucchini

Meryl said…
OOOH sounds yummy and healthy! Can't wait to try it. I am your newest follower (returning your follow) and look forward to more visits.
July 24, 2012 at 9:57 AM