on July 19, 2012
For years my Mom has used a large calendar and written something on every day of the year. The weather, who visited, etc. When I came across this pin, Mom was the first person that popped into my mind.


I loved the idea but not the the look. So the wheels in my head started turning.

Another pin was going to come into play for this project. Homemade ModPodge!

Sadly I didn't take pictures as I went along. I guess just in case it didn't turn out. I found a small box that I had around the house. Then I found some pretty paper. I started measuring and cutting. I had to cut the box down to fit. Duct tape is great because you can ModPodge right over it. Plastic tape doesn't work because the glue beads off from it. 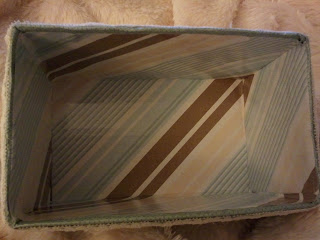 After the box was completely dry I took it outside and sprayed one coat of polyurethane on it. Inside and out. So far so good. 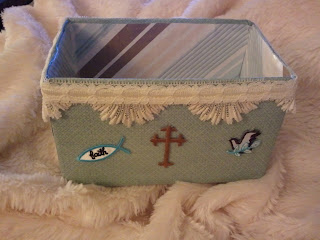 I had a piece of lace in one of my craft drawers. It had been there for a long time. Just a scrap but very pretty. I had no idea what it would ever be used for. Until now. I had to stretch it pretty tight but it did go all the way around the box. I hot glued it on the box along with some other sew/iron on embellishments. The box was done. 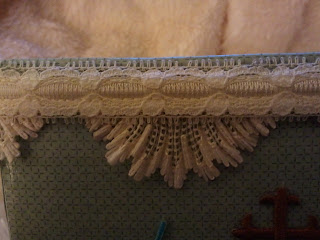 In between dry times on the box I was working on the cards that go in the box. This was actually the hardest, most tedious part of the project. I used 4x6" lined recipe cards. I did not cut them down. I wanted there to be plenty of room to write on year after year. 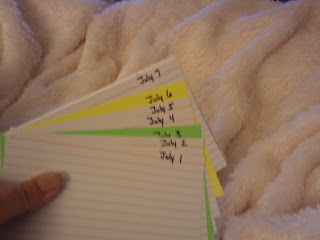 I used plain colored cards for months and stick on tabs. On each month card I made a column for birthdays and anniversaries. 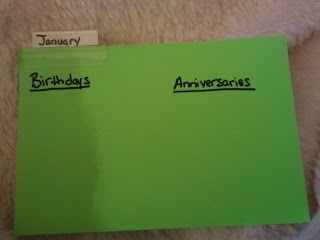 I waited patiently for the box to dry. Then I put the cards in. They were a perfect fit. (I was worried that after the layers of paper and glue it would be too small. 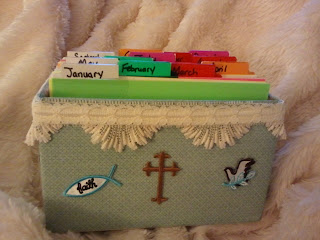 And there it is, all put together. Happy Birthday Mom!! I love you. (Now just to get it packed up and mailed!)

I think the next one I make I am either getting a date stamp or I will figure out a way to print the cards from the computer. Stickers. I need stickers.....

Theresa said…
I pinned something like this a while ago, but never got round to making it. The 5-year journal is what initally grabbed my interest, but I am not paying for something I could make! Your box turned out beautifully, thanks for the renewed inspiration.
July 24, 2012 at 8:41 AM

Robin said…
You're very welcome. I still have to get around to making myself one. I really love the idea too. I just know that my Mom will use this one, I don't have as much faith in myself.
July 24, 2012 at 11:33 AM

Shooting Stars Mag said…
What a great idea. I just pinned your post...I think my own mom would really enjoy this too. She loves DIY gifts in general.