on August 03, 2012
If anyone were to go through my recipe collection, whether it is a scrap of paper or in a book, they would find mostly desserts. Not that I don't have plenty of breads, entrees and whatever recipe there might be. I just have a love for dessert recipes. I wonder why.....

This morning as I was sorting through Grandma's recipes cards, dividing them up into categories, something interesting emerged. I only ended up with three stacks. Desserts/Sweets, Breads and Savory. Here is a picture of the stacks. 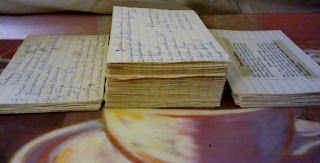 After the age of 8 I didn't really see my Grandma very often. In fact I don't remember seeing her much until one time when I was in my early 20's. I am sure I did but it would not have been for a long period of time and very sporadically.

I was traveling from Southern Illinois to North Central Minnesota to see my Mom. It just so happened that Grandma and Grandpa lived in the middle of Wisconsin. So I stopped. I remember that Grandma made me a sandwich. I am not a big fan of sandwiches to begin with. It was olive loaf. Now I really do not know what is in olive loaf but the word OLIVE stuck out. BLECH!! But I ate the sandwich and smiled. It was the best sandwich I'd ever eaten. Not because of the flavor but because Grandma made it for me.

Oh, the stacks of recipes. On the left are breads and on the right are savory. Yep, the middle stack is desserts!! Mystery solved. It is Grandma and her genes that gave me my love of desserts.

Off to the kitchen to make one of her recipes. I'll post it soon.