Quilt top in an hour 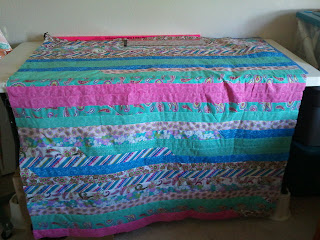 I love quilts! Not because of the intricate designs but because they are cuddly. Before today the only quilt I successfully made by myself was a simple patchwork. To my credit it has been 12+ years since I made it and it is still going strong. Might not be pretty but it sure is cuddly.

Mom has helped me make quilts since. She is a pro! I watch her in awe as she puts together masterpieces. She has instructed me over and over how it's done. I just don't get it. Sigh.

I find pretty patterns and I pin them hoping to someday figure it all out. Then I saw a video where the lady claims you can make a quilt top in an hour. Yeah right! This is me she's talking to. But I REALLY want to make a quilt. I bookmarked this video:


My next mission was to find jelly rolls that I liked. I grabbed my 40% off coupon for Hobby Lobby and headed there. The rolls didn't seem very big so I bought two of them. 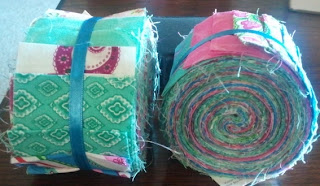 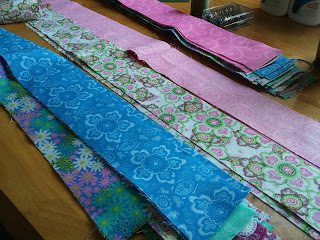 The next step was to sew them all together. Yikes! I did, then I tore them all apart because I wasn't paying attention and didn't have right sides together. This was really a pain and there is no way I can do this in an hour. I was really frustrated at this point and forgot to take pictures to document my mess.

Second try I only messed up two of them. Whew! After they were all together I began to snip the threads and cut off the excess material.

Then to sew two sides together. Seems simple enough right? Not for me! By the time I got to the end my material was so twisted I had no choice but to cut it. That turned out to be alright because it gets cut at the end anyway. 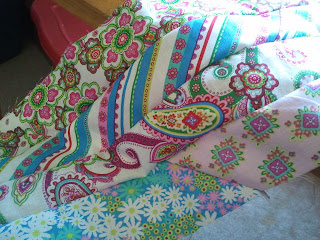 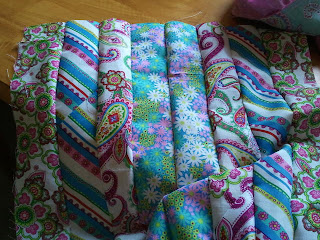 After that I just kept folding and cutting the end. It was mere minutes to finish the rest. The hardest part was truly the first two steps. And my goodness it turned out beautiful! 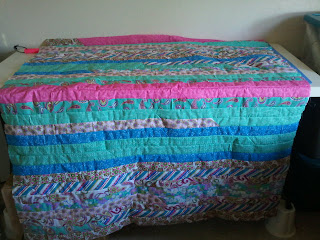 Then I ironed the back pressing all the seams the same direction.

And a close up. Isn't that pretty? 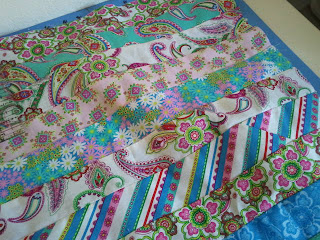 After I got past that first long stitch magic began to happen. Honestly, I became giddy with excitement that I was actually doing it. Now I want to make all kinds of them. My son will be getting married soon, I believe it will make an awesome gift.

I'm going to add border to make it bigger and make it nice and fluffy and most of all cuddly. I don't think I can do that in an hour though.
quilt