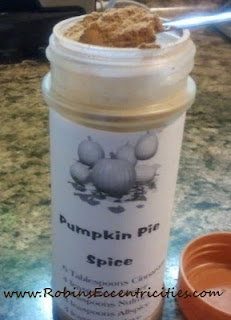 I was going to be lazy and just buy a container of pumpkin pie spice yesterday. Mine is getting low and I use it often during the fall cooking season. I scanned the rows of spices until I spotted it, then scanned down to the price. $4.28 for one of the tiny containers!! It was only 1.12 ounces.

That seemed like a crazy price to me so I walked away without the spice. I also walked away knowing that when I got home I would just mix up my own.

I use pumpkin pie spice in just about any recipe that calls for the ingredients in it. It does tell you on the container what is in there so it's kind of a no-brainer. (I don't use the McCormick brand which does not contain cloves, but does contain sulfiting agents, whatever that is. Another reason to make your own I think.)

The hardest part is to determine the amount of each spice.  I do know that the first ingredient has the highest ratio and the last has the least ratio. Using recipes that call for all the ingredients (rather than pumpkin pie spice) I figured out the proportions.


That being said, this recipe will make a tall spice container almost full. Cut it in half if you don't use it that often or even into a quarter of the batch. (I included those measurements at the bottom.)

*Another note: You can omit the clove if you don't want that strong of a flavor.
Toss it all in a bowl.

Did you know Allspice is the dried unripe berry of the pimento plant?
Mix it all up. And you are done. Yields about 1/2 cup of spice.

In the next picture, I poured in what I had left in my container. It's the little hill in the bowl. Hard to tell from the shadows in the picture, but the color is nearly identical. 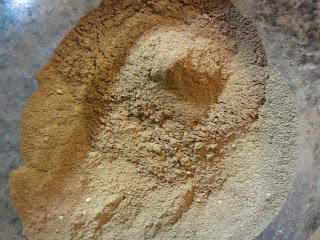 Funnel it into an airtight container. I just used my old one, but in case you are starting without a spice container make sure it's airtight. 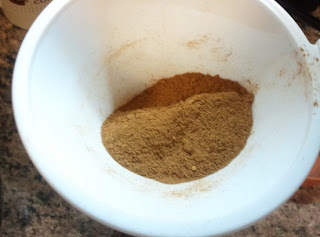