on November 29, 2012
I have a little chihuahua that loves to burrow. Her favorite place to burrow are the pillows on the bed. Not just amongst the pillows, but IN the pillows. I don't mind really. Except when I so easily forget and throw a pillow off the bed to make it only to discover it contained this miniature dog. 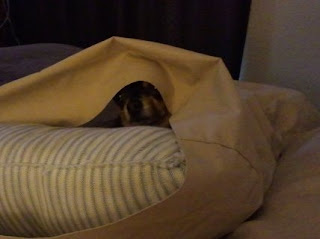 She is usually buried all the way in, I just happened to catch these pictures when she was on the edge. 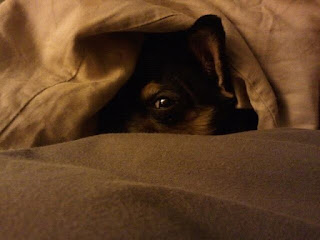 I saw a pattern for a circular pillow and thought why not make her one of her own with a little cover that she can climb into. I stuffed it with the stuffing from an old pillow for two reasons. I didn't have a new bag and the scent she knows is already in there.

There is no pattern, but really it's just a few circles all put together, stuffed and tied. I'll try to explain what I did through the pictures. 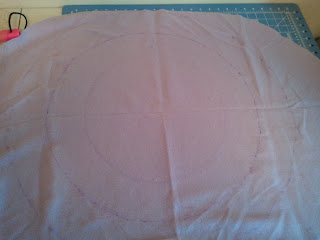 I found the biggest round bowl I could find, marked it and then added a few inches by just measuring out all around the circle. I did attempt to make a pattern for future use. It's just a wedge that can placed on fabric that is doubled twice. If you place it on the square corner correctly it will make a circle. You will need two fleece circles. 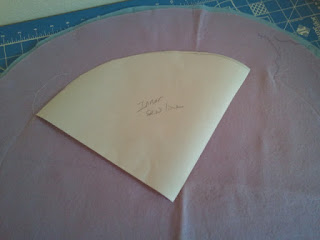 I used the same wedge to cut out the cover. I then cut the top off to make the opening for my little one to crawl into. I hemmed only the even top edge before pinning it to the layers of fleece. You could use any fabric for this cover. Or omit it altogether. I did not do a fancy hem, just turned once. 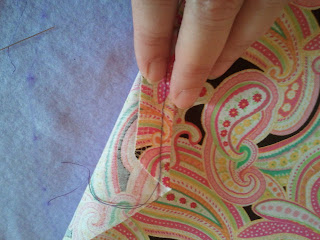 I sewed the top on first, but realized after the fact I could have just layered it altogether and made one circular stitch leaving on opening large enough to fill the pillow. The seam should be at least 3 inches into the circle. That will leave material to cut and tie. 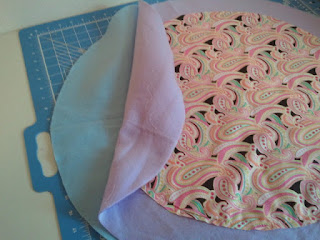 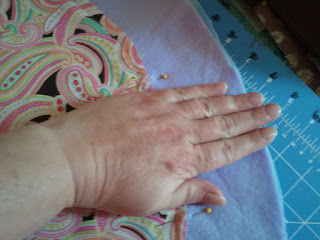 Now, clip all the edges around the case part about every 1/4". Throw it in the wash now to fray the edges before stuffing the pillow. You don't have to, I just figured it would dry faster if I washed it before filling it. 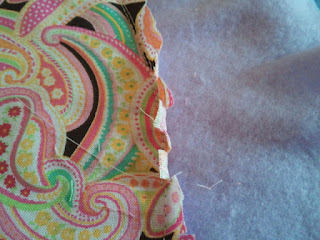 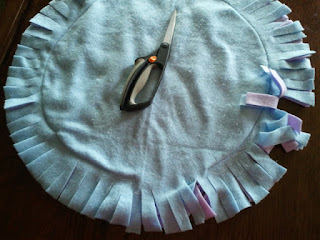 After you have that much tied, fill the pillow with whatever stuffing you chose. Tie the remaining fronts and backs together. Now go get your pet and try to convince them that this lovely new pillow is just for them and upset them by coaxing them into the opening to really prove it. (The better method is to put a treat inside the opening and let them discover a hidden treasure.) I also discovered that this little bed works for all the animals. As soon as one leaves it another one takes it over. 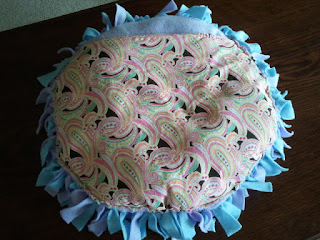 Here is a bad video of Little Bit snoring away in her new bed. Forgive the mess, my honey just got back from the field and there is stuff everywhere.

43sgjetsz2 said…
The welcome bundle at Red Dog 카지노사이트 Casino is valid as a mobile bonus as nicely, and the bonus funds are boosted by 20% for Neosurf and Bitcoin users. However, even if you guess solely on slots, you will nonetheless need to wager $500 money to withdraw the $50 no deposit credits. That is where the DraftKings bonus suffers compared to with} BetMGM and Borgata. With no deposit bonus choices, it’s essential to keep in mind that|do not forget that} none of those offers will present you with thousands of dollars. The quantity could also be} comparably small – $10 to $50, for example. But, keep in mind, you obtain it only for creating an account.
December 27, 2022 at 10:35 AM