Sometimes things happen that absolutely MUST be shared with the world. For those of you lucky enough to have ever heard Mikey tell one of his "stupid Mikey stories" will probably be able to imagine him telling this one. For those that haven't heard one of his stories you are missing out!

We have been busy lately. Very busy. We have been just eating when we feel like and rarely eat the same thing.

Last night Mikey asked for spaghetti for dinner. That was good because there was leftover sauce in the fridge and all I had to do was cook the noodles.

I left them on the stove for him to eat after he slept for a while.

This was mid evening.

A short while later I got tired and had a somewhat achy throat. Hot cocoa should do the trick. Hot cocoa with marshmallows even better.

I make my hot cocoa and sprinkle my marshmallows into it. I then proceed to bed with my cocoa to watch tv and relax.

This activity woke Mikey up.

He questioned me about his spaghetti. I told him it was on the stove and the sauce was in the fridge. He went to the kitchen to fix his plate.

He got everything ready and proceeded to sprinkle......what he thought was Kraft parmesan cheese on his spaghetti.

What he didn't know was the container of cheese that he thought I was nice enough to leave out for him was ACTUALLY the Kraft marshmallows.

Imagine his frustration now as he's having to pick these tiny little marshmallows out of his spaghetti.

Now in his defense:
Both are made by Kraft,
both are exactly the same size,
both have the exact same type of lid and
the marshmallows look like cheese if you look at the bottom of the container and are fixing your plate in a semi-sleep state.

Here are pictures to prove it 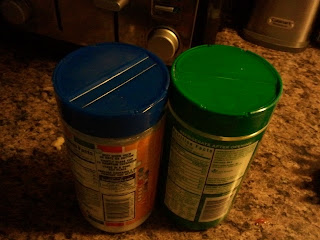 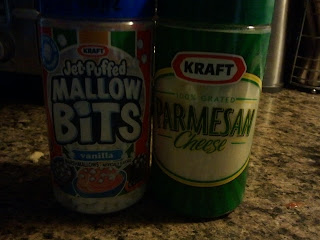 Yes, the lid covers are different. However, it's not something that a man (er...sorry, not changing that) is probably going to notice. Okay, at least not my man. He trusts me so much that he has no need to double check a container. At least he used to trust me....
Marshmallow spaghetti Mikey story

Many times you know a split second before it happens. You feel helpless. Perhaps even yell out "NO!!" Then it permeates the air. You choke. Your poor dog is yelping, running straight for the door to get back inside. What are you going to do? Run to the store to buy an expensive product? Tomato juice? No. Febreeze? No. Repeated baths? No. The solution? Make your own vet recommended wash. Mom reminded me of this today. I have no idea how our conversation even ended up on skunk smell. Sometimes our conversations go in very strange directions. But we're both eccentric so that's okay. Several years ago a vet recommended this combination to us and then recently another vet recommended it to my Mom when her dog got sprayed. She was smart enough to write the recipe down. Thank you Mom! No, my dogs didn't get sprayed. I worry though because every once in a while I get the pungent aroma of skunk in the neighborhood. I don't lie to myself and think it